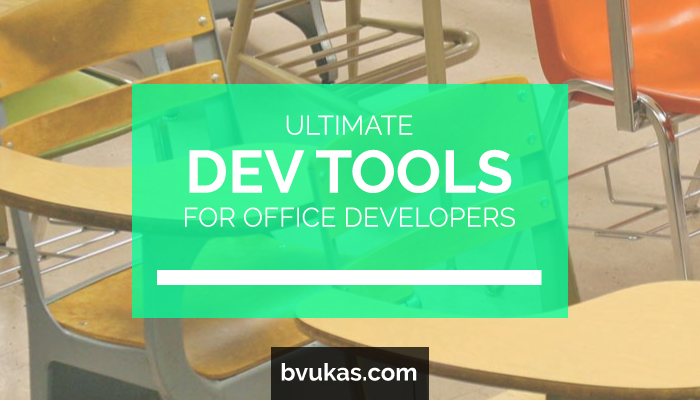 Visual Studio Community 2015 — The best free IDE, which satisfies almost all of my Office development needs. Unfortunately, it comes without project templates for Office development (hence you need to download the next item on our list).

Xamarin Studio — This is a great alternative to the Visual Studio IDE. I use it in cases when I needed to develop with C# on the Mac.

Sublime Text — Sublime Text is a sophisticated text editor for code, markup and prose. Works great on both Mac and Windows.

NuGet — NuGet is the package manager for the Microsoft development platform including .NET, comes included with Visual Studio and Xamarin.

Git — Git is a free and open source distributed version control system designed to handle everything from small to very large projects.

XCode — What Visual Studio is on Windows, Apple XCode is on the Mac.

Microsoft Enterprise Library —A collection of reusable software components (application blocks) designed to assist with common enterprise development features (such as logging, validation, data access, exception handling, and many others).

MVVM Light Toolkit — MVVM Light is a popular open source toolkit for development of applications using the Model-View-ViewModel (MVVM) pattern. It works with both Visual Studio and Xamarin.

MSTest —Included with all free and paid editions of Visual Studio, starting with 2012.

Oracle VirtualBox —This free virtualization solution is a staple in my dev & testing lab. It’s great if you need to move virtual machines around between Mac and Windows.

Parallels Desktop 10 for Mac — If Mac is your primary (and only machine), I highly recommend Parallels. It’s more user-friendly than VirtualBox, and highly optimized for speed.

VMware Workstation — Available for Windows and Linux, it also includes the VMware Visual Studio Add-in, which allows the direct debugging of apps inside any virtual machine.

Advanced Installer — Commercial installer package similar to InstallShield, comes in many different editions and it’s very easy to use.

InstallShield — Commercial installer with the most features. Suitable for expert-level deployments of any size.

WiX Toolset – Free tool for creating awesome MSI-compliant installers. Has a slight learning curve to it, but I still use it from time to time.

ClickOnce— This proprietary Microsoft technology is built directly into Visual Studio, and provides a fast way to build simple installers for Office add-ins and document-based solutions based on VSTO.

Apple PackageMaker — Awesome utility for building installers for the Mac.

For a good comparison of various installer authoring packages, I’ve written this article.

MZ-Tools — Set of tools that make the lives of VBA programmers much easier.

Remove VBA Password — Utility that allows you to remove VBA project passwords. Supports all Office desktop applications, as well as AutoCAD, and a few others, too!

Visual Studio Image Library — Directly from Microsoft, this free icons library is available in a visual style that matches the appearance of VS 2010, 2012 and 2013.

Glyfz — Toolbar icons for Office business applications, including styles for 2003, 2007 and newer. Icons come in different sets and sizes.

FamFamFam Icons — Another commercial library of icons available for use in Office desktop applications.

For a good comparison of these icon libraries, see my review: Best Icons for Office Developers.

The list contains most of the tools I use in my daily Office development. Did you find this list useful? Are there any other tools you would like added to this list? Let me know in the comments!